Because of his developments at Disney (the cartoon character analysis; live-action reference; in-studio art classes; the technique of “breaking the joints“; Mickey’s pal Goofy), Art Babbitt was the most widely innovative artist of the Golden Age of animation, and is hugely responsible for making Disney animation what it was.

When he saw injustice in his working community, he stood up, spoke out against it, and risked everything to be the leader of a summer-long labor strike against his boss and public figure, Walt Disney. 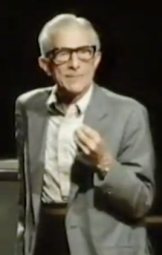 When he was all but forgotten and his name was “mud” at Disney’s, he was discovered by a London studio and was brought in to teach master classes in animation to the artists who would later animate Who Framed Roger Rabbit and help usher in the Animation Renaissance of the late-’80s.

If you think this man deserves his own book, please vote by clicking the “like” button on the right hand side!

4 Responses to Art Babbitt in 3 Sentences