In Frank Thomas and Ollie Johnston’s The Illusion of Life (pp72-73), they tell a story about the struggles of an early Disney cartoon and an anonymous animator.  It was mid-1933 and the artists, especially this particular animator, were much more ambitious than their talents provided.  What they don’t say is that the animator in this story was Art Babbitt. [My highlights are in bold]

There was a famous scene in The China Shop [released 1/13/34] that was talked about for years,  The story was simple: an old man has a china shop, and when he leaves at night the figurines come to life.  But the scene of the kindly old shopkeeper taking a last look around, then opening the door, walking through it, and closing it behind him was quite a change form the broad gags and actions in the earlier films.  The action not only had to be convincing, it had to have character. […]

The animator was determined to get a shuffling walk, a bent posture, and a feeling of age in the movements.  He did not want this man to reach far, take big steps, or in any way appear to be athletic or strong.  The layout man had drawn a door on a wall that had a true storybook feeling, but, unfortunately, the doorknob was on the far side of the door, a long distance from the elderly shopkeeper.  He had to walk over close enough to reach out easily and grasp it.  But this left him standing directly in the path of the door, which for some reason opened inward! 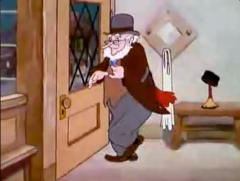 Two years after this, the animator would have run back to the Music Room [to the director] and screamed about the restricting layout.  […] But this option had not been considered at the time of The China Shop.  That animator, with great determination, attacked the problem from an action standpoint, probably hoping secretly that he would show everyone how well he could analyze the situation. 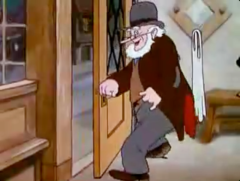 The door opened four inches and hit the gentleman’s foot.  He stepped back in a causal, shuffling manner.  He opened the door another four inches only to find that it had bumped against his other foot.

Again he stepped back – another four inches.  Now the door was against the first foot once more.

There was no way he could step back far enough into the scene to clear this door, and the farther he backed up the more problem there would be in walking around the obstruction to get outside, where he had to be by the end of the scene.  So as the film rolled by, the poor old man shuffled about endlessly as the door gradually opened enough for him to reverse his step and struggle into the night.  It was a comedy of errors on everyone’s part, but the animator bore the brunt of the kidding more than the director or the layout man.  There was much to be learned. 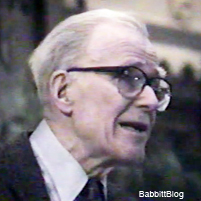 One of his lows was in […] “The China Shop,” which, when I was at the studio, was a laughing lesson that we all had to watch and see how poorly you can plan a scene and the trouble you can get into thereby.

What had happened was that the old man that ran the store was going home for the night and he says something to the fancy china dishes, “Don’t get into trouble.”  He opens the door but for some reason the door opened into the room instead of out onto the street.  And Art – I don’t know why he accepted the layout that way, but he did – and he first had the guy back up, and the door hit his feet. So he backed up again and the door still hit his feet. So he backed up another one, and he had an awful time getting out of that room. I think he used half the footage of the picture trying to get out through the door.

That was held up to us as an example of POOR PLANNING. Well, that was awfully unkind of them, to pick on Art that way, because it’s obviously a layout error — what could you do? Also, the fire department, I think, said something about the door opening the wrong way, how it’s supposed to open outside.

Well, Art had a key comment on that. He said, “It’s funny how everybody wants to take credit for my successes; no one will have anything to do with my failures.”

1 Response to The “China Shop” Story