It’s no secret that Chuck Jones and Art Babbitt were good friends from way back.  But in writing about Disney, Chuck borrowed one of Art’s own stories.  In Chuck Reducks (pp. 95-6) he writes: 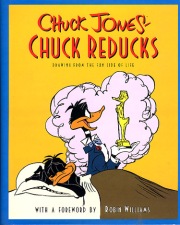 Disney animators were more likely to play practical jokes on their boss than write him fan letters.  There were stables a short quarter-mile from the old Disney studio, and the hungry horseflies who lived there soon learned that there was food to be had from Disney employees lunching al fresco by the Los Angeles River.  These horseflies were as big as bees, and they gave one alert animator an idea.  He began by netting a few of these muscular insects.  Knowing that Walt Disney and his family were solidly right-wing Republicans, he tore off some long strips of toilet paper, wrote “Vote for Roosevelt” on each one, and glues them to the rear end of the netted flies.  Later that day, he released his miniature squadron in Walt Disney’s quarters, where they flew around trailing their political message and driving Walt’s brother Roy crazy.

On the night of Art’s 50th anniversary as an animator in 1974 (where Chuck was the MC), Art told stories about the pranks at the Disney Studio:

… and you put rubber cement on the streamer, and you fasten a streamer to the fly under its wings.  And then like the planes at the beach that drag banners and all these — flies would fly around the room, with streamers on them that said “Vote for Roosevelt.”

1 Response to The Hyperion Horseflies Story