The Guild Vies for Disney Animators

In March 1941, the Screen Cartoon Guild (later the Screen Cartoonists Guild) was doing its hardest to attract Disney artists.  Other studios were already signed up, like MGM, George Pal, and Screen Gems (Columbia).  And Schlesinger (Warner Bros) was already in negotiations.  According to a topical article by entertainment writer Martin Quigley Jr., Disney cartoons were the most popular short subject in theaters, animated or not. 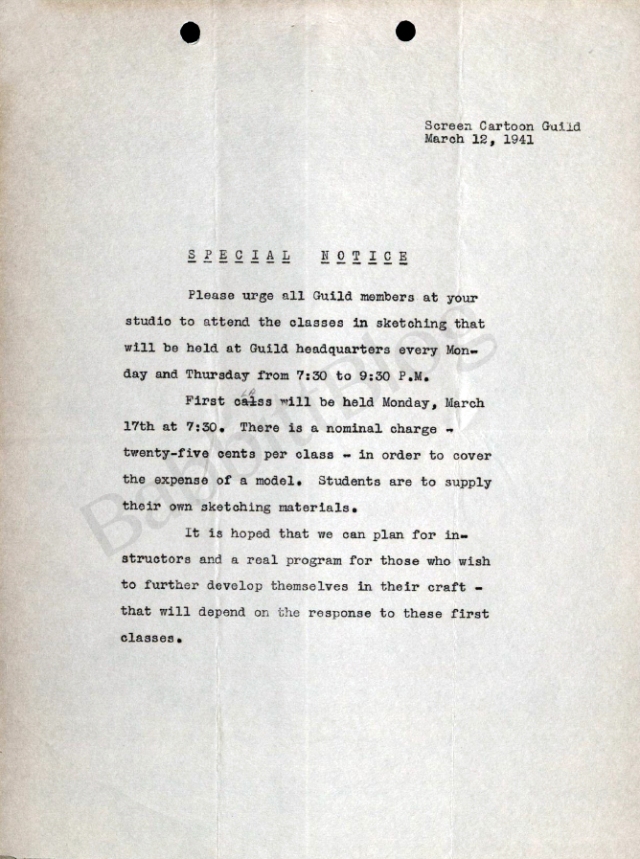 This flyer was not hanging up at the Disney studio, but rather distributed in the mail to Guild members.  The Guild began waving carrots at the animators in the form of cheap figure drawing sessions.  For members only, it would be a way to build community among Guild constituents, and entice new ones with the chance to “develop themselves in their craft.”  The event on flyer has Babbitt’s touch all over it.  It was Babbitt, after all, who organized the first figure drawing sessions for Disney artists back in 1932.  It is my guess that he and the Guild president Bill Littlejohn collaborated on forming these sketch sessions.

This event, organized by Littlejohn (an MGM animator), offered education about the Guild and all things union.

The tone of both these papers encourage dissemination.  And why not?  The Disney employees who were still leaning on the Federation of Screen Cartoonists (the bogus company union) would now get a chance to hear, objectively, what unions are about.  The speaker, a Samuel Kalish, is not a Guild member; he is a government employee.  The labor branch of the U.S. government, both federal and local, was still relatively new.  President Roosevelt put a system in place and hard-working Americans were encouraged to learn about it.

When this document reached Babbitt’s mailbox, he began talking about it and events like these to his coworkers.  Of course it was against company rules to discuss union matters on company property and on company time, but that did not stop Babbitt.

This entry was posted in 1941: The Disney Strike. Bookmark the permalink.