A Federation membership card from 1939

By February 1941, the fake Disney union, the company-run FEDERATION OF SCREEN CARTOONISTS, was under threat.  Rounding the corner was an actual independent union, the SCREEN CARTOONISTS GUILD.  The GUILD had already signed up the animators of MGM.  Around Feb 6 [or Feb 15 – sources vary] the GUILD held a mass meeting.  After Dorothy Parker read a speech, Art Babbitt took the mic and publicly discredited the FEDERATION.

On February 4, the National Labor Relations Board – the same department of the U.S. government that had certified the FEDERATION – began investigating the GUILD’s charge that the FEDERATION was in fact an illegal company union.

Although union activity on company grounds is against the National Labor Relations Act (section 8, subsection 2), the FEDERATION posted bulletins throughout the Disney studio.  Here are a few from February alone. 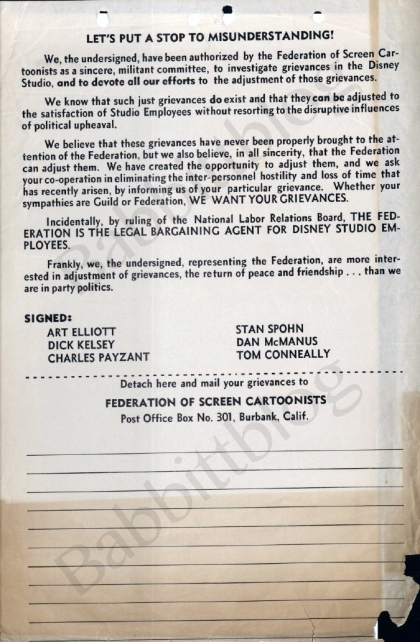 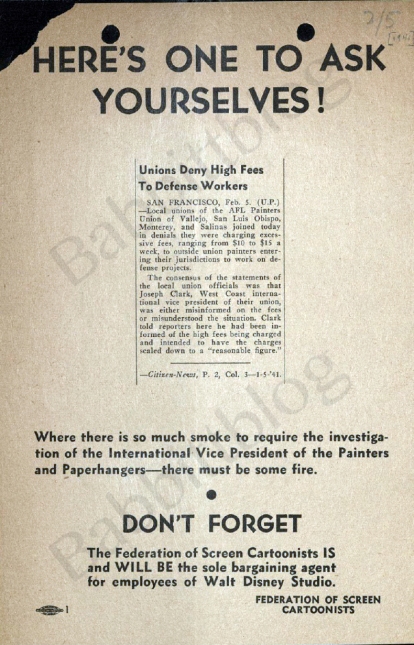 Notice that the FEDERATION is not only trying to reinforce its position as the sole union legally designated by the Labor Board, it also tries to disparage independent unions, like this single incident in San Francisco.  Still, it’s not enough to repel people from the GUILD.   After the GUILD’s huge meeting in the second week of February, the FEDERATION pulls out even more stops: 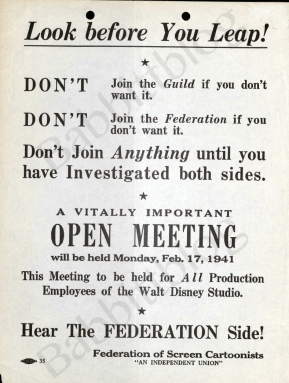 The FEDERATION touts itself to be “clean, fair and organized” and has “definite contractual aims” that seem in line with what the average GUILD member wants. The GUILD members consider it smoke and mirrors.  The FEDERATION had been promised negotiations once before, and then company management said they had no use for unions.  In two years, the FEDERATION had earned no negotiations for the employees.  The GUILD, meanwhile, had been organizing other studios (most recently MGM) for months, and earned them union contracts.  This was a union that could get things done.

Though labeled an “impartial chairman” of the FEDERATION, attorney Anthony O’Rourke’s salary during February, March, April and May of 1941 was not impartial.  Fifty per cent of his salary was gleaned from Disney management, and 50% came from the Federation budget.  In November, O’Rourke was hired full-time by the Disney company as the director of labor relations.  “The strike hurt the company!” he would later protest in court.   Not the words of an impartial chairman at all.

The “contract” – though tempting – is still at the whim of the studio.  Almost too little too late.  Besides its arbitrary sliding scales, and there is still nothing set in place for the top earners.  It does not satisfy GUILD members.  But don’t take my word for it – take a look for yourself at the images below and consider what you would do if you were offered this new salary plan at the Disney studio in February 1941.