The Disney Strike has shaped Hollywood politics for 75 years.  It was during an age in which an entire industry (film) was slowly becoming unionized, and an entire workforce (animation artists) was the last to do so.  More than three hundred Disney artists went on strike for the right to have an independent union.   Spoiler alert!  — they won!  And then there was a law suit.  Actually, there were two.  And Art Babbitt headed them both.  Here’s a condensed version of the story of the Disney Strike and the ensuing repercussions.

Broadly speaking, the 30s was a hotbed of union activity, and Hollywood was no exception.  Unions like the Screen Actors Guild, Screen Directors Guild, Screen Writers Guild (remember that strike that made Colbert improvise a week’s worth of shows a few years ago?) were all formed in the 1930s.

One of them was the International Alliance of Theatrical Stage Employees, a corrupt union run by a couple crooks, racketeers Willie Bioff and George Browne.  Bioff & Browne, who had mafia ties, would sign up a studio’s entire department to the IATSE, and then blackmail the studio heads with a strike unless they would personally pay them off.  It was an underhanded scheme, plus they were giving unions a bad name

In 1937, the Disney artists were working their tails off to finish Snow White.  Even the 1937 newsreels attest they worked “day and night,” thus earning less per hour.  Why?  Two main reasons: 1) They knew they were part of something monumental. And 2) Walt promised that a share of the profits would be going back to them. 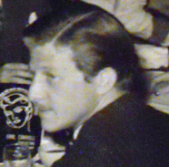 In early December 1937, mere weeks before Snow White was set to premiere, word got around the Disney studio that IATSE reps were scouting out the joint, trying to sign people up. This infuriated Babbitt.  Babbitt was a midwestern son of immigrants who struggled to support his parents and siblings in New York City.  He believed in hard work and an honest living, as well as civil liberties.  He did not want his freedoms – or the freedoms of the studio – to be compromised by crooks.  So he went directly to the VP, Roy O. Disney.  And Roy pointed Babbitt to VP and company Lawyer, Gunther Lessing.

Lessing was about 15 years older than the Disney brothers, and with his bald head and three-piece-suit, looked the part of the supportive father figure the brothers sought.  Babbitt and Lessing collaborated on a “loosely-knit social organization” to keep the IATSE out.  It premiered in January 1938 and was called (drum roll…) “THE FEDERATION OF SCREEN CARTOONISTS.”

The Federation promised to give Disney employees negotiating power that would obviate the need for IATSE.  Except no negotiations took place.  So people got bored with it and lost interest – until July 1939, when the National Labor Relations Board (all the way in Washington D.C.) certified it as a union.  Everyone was thrilled. In October, the animators who made up the Federation board – Babbitt as VP, and cartoon director Bill Roberts as Prez – met with Roy to discuss union demands.  But Roy refused to negotiate.  He had no use for unions.

Snow White was a smash hit.  Walt paid his artists the bonus as promised – except many argued that this bonus only equaled the unpaid hours they had already worked.  Walt’s real bonus was the brand new studio he was building for his staff, a beautiful new campus in Burbank, complete with air conditioning!  Alas, air-conditioning wouldn’t put food on these artists’ tables, and they move into the new digs in January 1940 with mixed emotions.

Throughout 1940, interest in the Federation continued to wane again, until October when Lessing called Babbitt and the rest of the board into his office.  He was panicked: the IATSE had signed up members of the camera department.  Babbitt couldn’t care less at this point and told Lessing so.  That night, the Federation board members agreed to let their faux-union fade into oblivion.

Meanwhile, a new union popped up that would be called (wait for it) the SCREEN CARTOONISTS GUILD.  This was legit, and they were a splinter group of another legit union, the Brotherhood of Painters, Decorators, and Paperhangers.  The Guild had signed up the animators from the other studios, most recently MGM (as in “Tom & Jerry” cartoons).

Union sign-ups were remarkably loose and therefore hard to keep straight.  All you needed to do to be member of a union is to sign your name on a slip and date it.  The organizer kept that slip.  If you change your mind and sign up for a different union, that union made it easy for you; all you do is sign and date one of their slips, and that negates the previous union’s slip.

In December Walt called Babbitt and the other Federation heads into his office to try to stop the Guild from representing the studio, which, according to a letter from the Guild, they already did.   But if those who joined the Guild would instead join the Federation, Walt would sign a “closed-shop” agreement with the Federation. A “closed shop” means that everyone at the studio would be required to be a member of a union – in this case, the Federation. Walt said: call the Federation’s attorney and we’ll sort this out!

Babbitt thought this was bullcrap and refused to call the Federation’s attorney.  Instead, Bill Roberts ran to phone with a “We’ve got to do this for Walt” attitude.  Their attorney wouldn’t take part, and Roberts dragged Babbitt on a quest – during company time – for a new lawyer. Now Roberts was acting unilaterally when there should be a vote among the board, which technically already voted to dissolve.

By January 1941, supervisors (like Freddy Moore!)  were going around the Disney studio trying to get employees to sign up for the Federation.  By February, Babbitt was going around talking to employees about the Guild.  It was also that month Babbitt started getting fewer assignments from the studio.  He talked to associate-director Hal Adelquist about that.  Adelquist and he had been old friends – had even introduced Babbitt to Babbitt’s wife, Marge.  Now he was telling Babbitt to stop this union-talk on company time and property.  Babbitt pointed out the hypocrisy in Adelquist’s words.  In March Babbitt accepted the position of the Disney chairman for the Guild, and started having Guild meetings at his home.  His first decision as chair – start a Disney boycott! Lessing read about this in the paper and nearly blew his top.

In April, Babbitt and Walt met about a potential $2 raise for Babbitt’s assistant [sources vary on whether this was Bill Hurtz or Chuck Shaw; maybe it was both]. The salary schedule for employees was more or less arbitrary, and Babbitt didn’t want his assistant to get paid any less than another assistant whose work isn’t even as good. Walt refused, so Babbitt paid the raise out of his own pocket. And this company-defying behavior infuriated Walt all the more.  (According to Babbitt,) Walt said to him, “If you don’t quit organizing my employees, you’re going to get into trouble.” Later that month, the National Labor Relations Board (all the way in Washington D.C.) had its first court hearing questioning the Federation’s authenticity.

In early May, Babbitt received no assignments.  Walt said it was because Babbitt was hard to work with, but no director, including Roberts, corroborated this story. Meanwhile, because of the heat from Washington, the Federation disbanded … and the next day a new company union popped up in its place with the same people on its board.  On May 16, the studio fired two dozen Disney employees.  All of them were Guild members, and some of them were Guild board members.  The Guild got pissed. They made a statement saying that they want to have a meeting about this with Walt.  Alas, not Walt nor any Disney management responded, even after several tries.  Finally, on May 27 the Guild voted to mail a telegram to the studio saying they’ll strike if they don’t get a meeting.  So Disney management responded ……..

….. by firing Art Babbitt the next day.  It was right after lunchtime.  Like a boss, Babbitt parked his car out front and took his time emptying his desk and loading his car until the spectacle attracted the majority of the employees.  And hundreds of them walked out.

And so, May 29 began the first picket of the Disney Strike.

This entry was posted in 1932-1941: Disney Glory Days, 1941: The Disney Strike, Snow White and the Seven Dwarfs. Bookmark the permalink.