In 1930, while employed as an animator  at Terrytoons in the Bronx, Art Babbitt watched legendary filmmaker D. W. Griffith make a little girl cry on a movie set  …

…But this all begins with Thomas Edison.

The oblong, drab structure on Decatur Ave between 198th street and Oliver Place in the Bronx was known as the “Edison Building”  (its actual address was 2826 Decatur Ave).  It was a reinforced-concrete office building 35 feet high, made up of three abnormally tall stories.  [1]

In the early 1900s, motion pictures were becoming a huge new industry.  About forty theaters would buy prints of the same film which took only a month to a week to make.   Business-savvy Thomas Edison was successfully selling short movies filmed on the rooftop of his building on 21st street in Manhattan.  But he wanted more space and more epic story-lines.[2]

A plot of Bronx land 100 feet by 60 feet was purchased by Edison’s people in June of 1905.  The concrete office building was completed and occupied in July, 1907.  Adjoining it, glittering like a 40-foot crystal tower, was a giant glass house.  In the days before super-powered lights, glass houses that captured the daylight were the only option when shooting a movie, as re-enacted in the period film Hugo (2011).  This one cost Edison $100,000. [3] 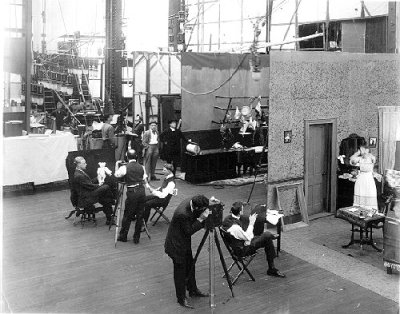 Edison Studios in the Bronx produced films starting with Stage Struck, directed by Edwin Porter, and starring Herbert Prior as a pauper who helps a group of girls escape their farm for a career in vaudeville.  Subsequent films included the western A Race for Millions (1907), and most famously, the very first monster movie, Frankenstein (1910). 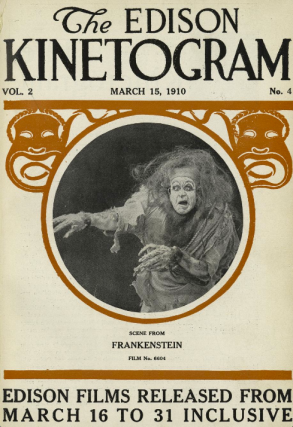 On March 28th, 1914, between production days of the Civil War epic The Battle of Mobile Bay, a fire destroyed Edison’s glass house and gutted the concrete office.  Entire wardrobes, hand-built sets, and film prints were completely destroyed, and thus ended Edison’s film-making at this location.  … [4]

… It did not, however, mark the end of film-making at this location for others.

Stay tuned for Part 2, in which we introduce Paul Terry, Art Babbitt and D.W. Griffith!