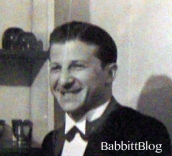 In the 1930s, Walt Disney moved forward with his in-studio education program.  As was regular office practice at the time, he also had stenographers keeping track of all discussions and notes.

A training course lecture series was started to allow the top artists to share what they’ve learned to the staff en masse.  On Wednesday, September 23, 1936, Babbitt lectured to a room full of Disney artists.   The notes of this lecture go on for 17 pages (!!!) but here is the first highlight, with more to follow.

In this first post, Babbitt talks about how the arts of animation and music are so similar:

It’s worth noting that at this time, Babbitt was the mandolin player in the studio band (this was before “Firehouse Five Plus Two”), was taking piano lessons at his home, and was friends with famous pianist Richard Buhlig.

A scene from Fantasia animated by Babbitt

3 Responses to 1936 Lecture: Animation is Music