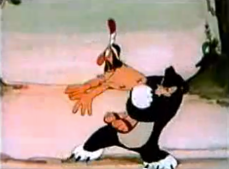 Argentina’s first color animated short, Upa en Apuros, was created in 1942 by cartoonist Dante Quinterno, and starred his signature South American native character, Patoruzú.  Produced entirely in Argentina, it was a milestone for the continent as a whole, and was done in collaboration with TOP Disney animator Art Babbitt.

Walt Disney took a famous trip to South America from mid-August to late-October of 1941.  The Nazi influence was spreading across Europe, and a lot of countries in South America were still on the fence about fascism.  So, to promote the glories of democracy, President Roosevelt created his “Good Neighbor Policy.”  The democracy-loving U.S. would show its love for its neighbors to the south, and thus gain allies against Hitler.  Popular singer Bing Crosby was one such envoy.  But most significant was Walt Disney, because he developed two animated movies inspired by what he and his small group of traveling artists found there.  You can learn about this trip in detail in the solid documentary, Walt & El Grupo.

Now, before Walt left, there were 300 of his artists striking outside his studio, led by Art Babbitt.  When Walt got back, the strike was settled and the studio was following union rules.  And Art Babbitt, a thorn in Disney’s side, insisted on continuing his employment at the studio.  Firing him would break a 1935 law called the “Wagner Act,” which states the employees have a right to unionize.  But Art was fired.  So he took Walt to court.

Art Babbitt had more than one law suit pending in January of 1942, when he took his own trip to South America.  He made arrangements to meet Quinterno in Buenos Aires and tour his studio, where the country’s most popular cartoon character was being drawn.  His diary entries are below… 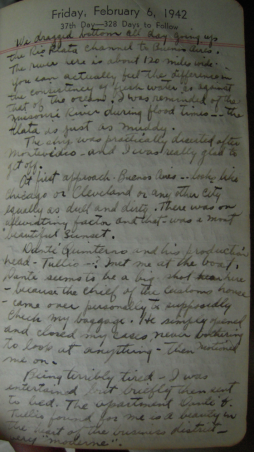 […]Dante Quinterno and his production head – Tullis…? met me at the boat.  Dante seems to be a big shot here  – because the chief of the customs house came over personally to supposedly check my baggage.  He simply opened and closed my cases, never bothering to look at anything – then motioned me on.

Being terribly tired – I was entertained but briefly – then send to bed.  The apartment Dante + Tullis found for me is a beauty in the heart of the business district – very “moderne”.

Spent practically all day at Quinterno’s place.  I don’t know where he gets all the energy — but

he most certainly has his finger in plenty of pies.  He has thirty employees – and besides his newspaper comic strip he edits and publishes a humorous magazine – does three additional comic strips and is producing an animated cartoon.

I heard their sound and saw the pencil tests of their picture today.  The music is exquisite – the characterization very good and the plot and gags good but a bit heavy and brutal in a typically foreign manner.  The animation is not too good — but considering the fact that these men have taught themselves all the principals of animation in but a few months — their work is remarkable.

Some of their actions are exceedingly original – humorous and refreshing and both Tullis + Dante are damn good draftsmen.  Their equipment is primitive – but still a hell of a lot better than I had expected.

Spent all day correcting the animation and story of Dante’s picture.  It was hard work but i enjoyed it thoroughly.  Who knows – I may be in some sort of partnership in time to come.  I think I’ll wait to see what sort of success he has with his first picture and then it might be a good idea to make a tie-up.

Dante is a man of temperament – but he has good judgement and taste.  He’s not the boor that Disney is.[…]

The Argentinians do not like Americans and they want no part of this war.

…and in the meantime, Click Below to watch Dante Quinterno’s finished film!

3 Responses to The Babbitt Diary: Animating in Argentina – part 1