Art Babbitt (here at 23) and Bill Tytla (here at 26) are credited for being two of the greatest animators and Disney innovators of all time.  Bill Tytla especially was given enormous credit in various Disney books, including The Illusion of Life.  He and Art Babbitt were close friends and ended up climbing the ranks of Disney together.  But when this picture was taken at Terrytoons around 1931, that friendship hadn’t yet crystallized. 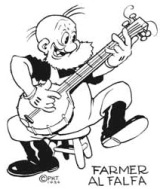 Art Babbitt had been working at the Bronx-based animation Studio, Terrytoons, for a couple years and may have heard about the “good animator” who was off in Europe studying fine art.  Then (probably): in February 1931, a tall young Cossack with a New York accent struts through the studio.  He gets pats on the back and “welcome home”s from the other animators.  Bill takes his seat at his animation desk, gets his layout scenes, and starts working on the latest short for Terrytoons, Quack Quack, scheduled to be released on March 8th, 1931 (a cartoon about Farmer Al Falfa’s trip to the dentist).

Babbitt and Tytla would work on many projects together, most signifantly Disney’s Fantasia, Dumbo and Pinnochio.  But it all started with this animated short.

Layout drawings (by Frank Moser) of some of Bill Tytla’s Scenes from Quack Quack :

And two of Art Babbitt’s scenes

5 Responses to When Babbitt Met Tytla