As continued from The Snow White Wrap Party – part 1, here are some more pics, courtesy of Disney artist Willie Pyle, from the weekend of June 4, 1938.

Young Art Babbitt wasn’t much of a dancer – or a drinker, for that matter.  But he was social, and valued his friends at the Walt Disney studio.  No records survive concerning how he spent this particular weekend – he didn’t play baseball, touch football, volleyball, golf, or much else in the way of sports (his widow says he could grow frustrated with things he wasn’t excellent at).  He did like the water, though, and chances are he took a dip in the hotel pool.

In Walt’s People vol 3, Disney artist Bill Justice remembers, “for two years, all of us had been under terrible pressure, working long hours day and night to finish Snow White. When I came on at the end of production, I still felt that stress. When we arrived at the Narconian Hotel there were pools to swim in, tennis courts, a golf course, live music, and plenty of food and alcohol and something just snapped.” 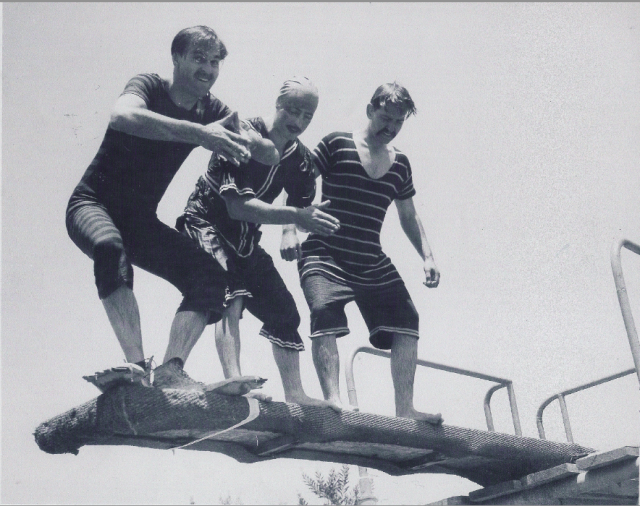 I don’t know who these fellas are, but they look like they’re having a good time. 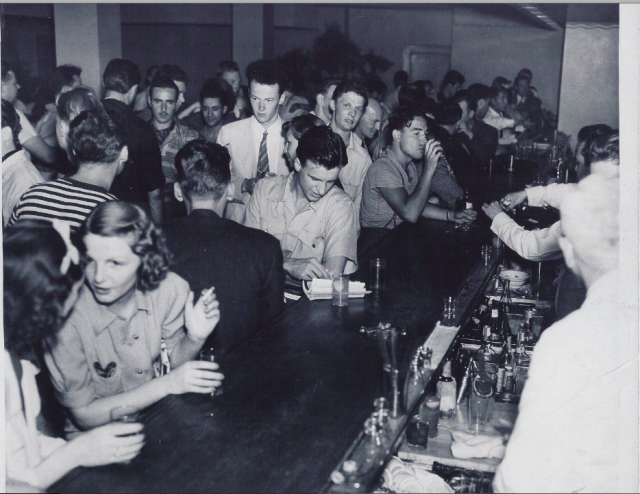 “Walt took over the Narconian hotel,” says artist Ward Kimball in Walt’s People vol 10.  “The first floor hosted the unmarried guys, the second floor the unmarried girls and the third floor the married employees.  It was a wild party.”

If you notice the black triangles on the corners of this photo, it’s because the photographer was holding the camera at a drunken tilt when this photo was snapped.

Sam Cobean, here at age 25, had been working at Disney for 11 months in cleanup animation (making rough drawings look nice) and inbetweening (making the drawings between the main poses), two low-level animation positions.  In his employee evaluation, Disney staff listed this under “Weaknesses”: “Perenial griper, and undependable.  Somewhat lazy and has good time Charley attitude.  Is on radical side.  Story organizer for the Guild.”  Indeed, Cobean would join the Disney Strike in 1941 (which Babbitt led).  He would leave to become a very successful cartoonist for The New Yorker.

Les Clark, here at 30, had been with Walt and Roy Disney since the very beginning of Mickey Mouse – back during the silent film era!  He was one of Walt’s most trusted employees, and would stay with the company for most of his life, becoming one of Disney’s legendary “Nine Old Men” of animation.  He was Art Babbitt’s good friend before the strike, swapping homemade wise-ass Christmas cards and going on camping trips.   After the strike they stopped speaking.

Willie Pyle, here at age 23, had barely started working at Disney’s when he was invited to the greatest party the studio ever held.  He was a traffic boy (see Part 1) and in 1939 leaped straight into assisting on features, without working on shorts at all.  This was most likely thanks to the skills acquired by keeping perfect attendance in Don Graham’s art class held at the Disney Studios, which Art Babbitt started.  Willie, who was close friends with Sam Cobean, went out on strike as well, but returned to the studio to finish Bambi. He became an animator at UPA (where Art later worked) and an independent animator and illustrator.

I wish I knew more about Kosti Ruohomaa.  He was born in Finland and was probably lured to the Disney studios during the talent-search in anticipation of Snow White.  He left Disney’s to become a photographer, best-known for capturing vignettes of American life in the 1950s.

According to Willie Pyle, this is Marceil Clark, Les Clark’s sister.  And this gentleman might be Ollie Johnston, but I don’t know.  What do you think?