The Tornado Outbreak of 1913

People’s lives are shaped by the experiences they have as young children.  For Walt Disney, it was the fairy tales and old Americana he was introduced to as a struggling paperboy in Missouri.  For Art Babbitt, it began with a natural disaster.

This weekend marks the centennial of the infamous 1913 tornado outbreak that destroyed parts of Omaha.  What the 1871 fire was to Chicago, this disaster was to the Nebraska city where Art Babbitt was born and his family was living.  The tornado hit at 6pm on March 23, Easter Sunday, which coincided with the Jewish holiday of Purim; it blew through Douglas County and the Jewish quarter there.  Arthur Babitzky was five and a half years old.

Shloime Babitzky, Art’s father, was a peddler and a religious Jewish scholar.  Although the original Babitzky home was on 1436 South 13th street, by the time Art was in kindergarten at the Kellom school, they lived across the way at 2216 Charles Street.  Their home was almost right on the intersection of 24th and Hamilton street, dangerously close to  the direct path of the tornado.  Church congregations were flattened; babies were sucked out of windows.  In all, 94 people died in Omaha that day.  Art said, “My father figured that God, if you believe in God, was trying to tell him something.  That’s when he decided that we should move away from tornadoes, and we moved to Sioux City Iowa.” [1] 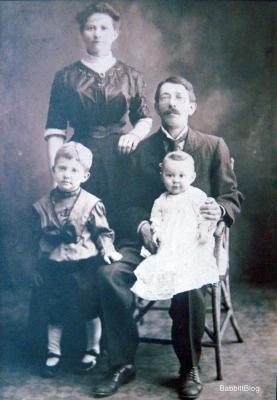 Art’s brother Ike [b. 1911] remembered: “In 1913 we moved what amounted to a hundres miles up the Missouri River, north, to Sioux City Iowa where the climate was supposed to have been better.  Not like today when people pick up and go to Arizona or Florida, a thousand or fifteen hundred, two thousand miles.  We went a hundred miles up the river.  And I’m sure we went by horse and wagon.  With all the household possessions and everything.” [2]

Art said, “We were so poor at the time, we arrived in Sioux City on the 21st of February, of whatever year that was [1914], and there had been a heavy snow.  We did not have the car fare from the railroad station to our alleged home that my father had prepared.  So we were obliged to walk about two or three miles through the snow, which led to my mother giving premature birth to my sister [Fannie] on George Washington’s birthday.” [3]