Well, here we are, in Pittsburgh, on Friday, January 26th.  How’s 1940 treating you so far?  Brrr — Cold enough  for you?  Hey, hows about we take in a show tonight?  It just so happens I have a copy of the Pittsburgh Press right here.  Let’s just flip to the Entertainment section…

Ooh, Stravinsky is a guest conductor at the Pittsburgh Symphony.  And that new feature cartoon Gullivers Travels appears like it might be the next Snow White.  Hey, speaking of Snow White, look at this, on the right: 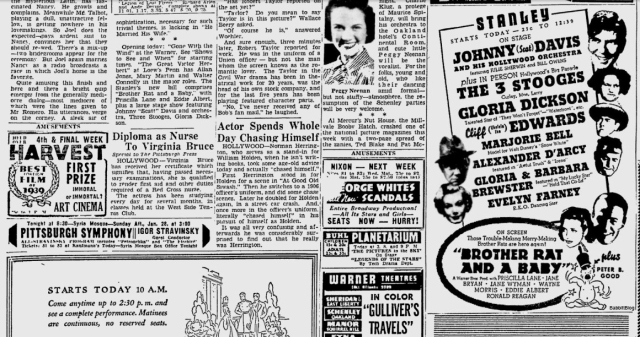 Who’s that performing with the 3 Stooges?  “Marjorie Bell: Model for Walt Disney’s ‘Snow White‘”.  We can’t miss that!  (I also go buggy for Cliff Edwards.)

This was the tour that cost Art and Marge their marriage.  According to her, the tour was scheduled for ten weeks but ran only for three, hitting Chicago, Gary Indiana, Pittsburgh and Buffalo.

Marge was barely twenty when she toured with this Vaudeville act.  She shared a hotel room with tap dancer Evelyn Farney [1], all the while getting phone calls and letters.  It was always Art, asking her to return home to Hollywood.  “He was on the phone a lot and writing a lot of letters, and then he gave me this ultimatum, either come home and have babies, or he was going to divorce.  And he did; I never went to court.”[2]  Marge exchanged her return ticket for a one-way to New York, and the two were divorced later that year.  It was in New York where she and Art met up in 1942.  “…since Marge + I have been divorced 2 years…,” wrote Babbitt, “I’m trying hard to grow civilized and I can’t make myself dislike a very charming person just because our marriage bumped into a career.”[3]