“The Reluctant Dragon” and the Disney Strike

Friday night, June 20, 1941.  The Disney animators have been striking for 2 weeks.  The Hollywood public was dolled up for the black-tie premiere of Walt Disney’s latest picture, and there’s much speculation.

Walt had brought the fairy tale to vivid life with Snow White and Pinocchio, and continued breaking new ground with Fantasia.  A Disney film was a big thing.  Like the first several Pixar films, you knew this was not only an entertainment factory, this was a laboratory where creativity and technological innovation were pushed simultaneously.  Walt was a man to be respected, and indeed, he was.

Walt’s limousine and other high-class automobiles pulled up one in front of the marquee.  Just as naturally, another black limousine pulled up.  The driver went over to the passenger’s side, held open his door, and out stepped a man in a snazzy tuxedo.  His driver handed him a wooden picket sign.  One by one, finely-dressed men and women started piling out of the limo, all dressed to the nines, and they were joined by others, all with picket signs. The driver of that limo was Maurice Noble, a striking background artist.  His passenger was the strike leader, Art Babbitt.

These pictures today are courtesy of Liz Johnson at ideologicalart.wordpress.com. 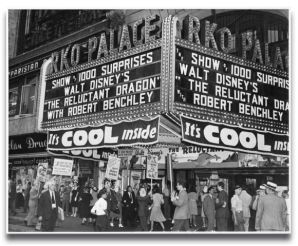 (Remember to click on the images to enlarge them!)

2 Responses to “The Reluctant Dragon” and the Disney Strike