People don’t grow in a vacuum.  Everyone is somehow influenced by their world around them.  This midwestern kid, Born in Omaha and raised in Sioux City, was suddenly entrenched by the Jazz Age!  — F. Scott Fitgerald’s “land of ambition and success,” the Roaring Twenties, and the first Macy’s Parade.

Sioux City had horses and carriages (Art’s father was horribly injured while driving one).  New York had hoards of motorists.  Stores were competing to sell you the most affordable radio.  The country had exited WWI as a superpower and economic powerhouse.

In New York, everyone was talking about Wall Street.  Fortunes were being made.  Art Babbitt was working for a grocer as a stock boy.  One day he found a business card in the street for an ad agency and he applied as an artist.  Thus began his career as “a pencil pusher.”

In 1928 New York governor Al Smith ran for president against Herbert Hoover.  Smith was somewhat of a hero for the labor reform movement, pushing through legislation for social welfare and public works projects.  He was elected for four terms, and when he ran for president against Hoover, he lost.  Terribly. This was in no small part to country-wide bigotry against his Irish Catholic roots.  The KKK even burned crucifixes at the stops of his campaign.  In 1928, it was a sin to be different, to have immigrant roots. 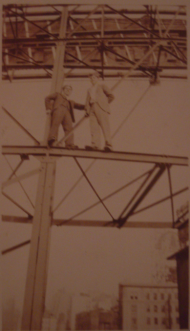 By the end of 1929, the Crash brought the investors to ruin.  Art Babbitt was not an investor – with an injured father and a family of six, he couldn’t afford to be.

He had been running a successful independent business as an illustrator and ad man (and had done some crude animation this way) and got a job at Terrytoons months before the crash.

But this was the Great Depression.  Bread lines  and shantytowns were emerging, as well as one enormous oddity.

The Empire State Building was being constructed at record speed, and by 1932 the tallest building in the world sat in the middle of Manhattan.  It was dedicated live by Al Smith (filmed for newsreels and recorded and broadcasted on the radio), who had nothing to do with the construction whatsoever.  He had been assigned the “head of the project” by businessman John Jacob Raskob, the man with the ambition and the money to build this colossus.  Raskob had been Smith’s campaign manager for his crippling run for presidency and felt he owed him one.  As a result, the people of New York watched laborers risk their lives on a daily basis, while the ex-governor cut the ribbon.

There’s much more to Art Babbitt’s New York that needs to be shared – like his personal encounters with Cab Calloway in Harlem and the Zigfreld Follies dancing girls on Broadway, not to mention xenophobic Red Scare, the politics of corrupt showman mayor Jimmy Walker, “liberal Bolshevism” criticisms of president Roosevelt, and the WWI vet Bonus Strikers.  But that will have to wait for another day.